My Path to Chasing Grace 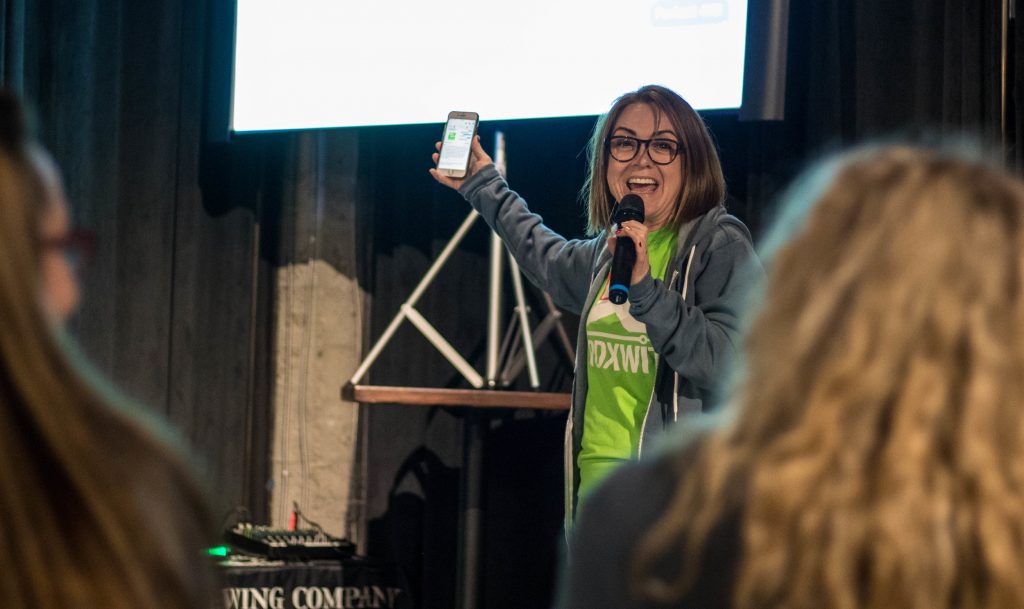 2017 marks 10 years since I experienced, first-hand, the pain, shame and anguish of the gender gap.

I started my career in tech in 2000, and the insidious symptoms of the gender gap started, too. I was fresh out of college, living in my favorite city (Portland) and felt I had nothing but success ahead of me. I was working at a local company in a technical role, making friends and building my life. I was one of the few women in my department — the youngest by at least a decade — and was regularly hearing comments about my looks and clothes. Colleagues certainly underestimated my abilities, but I was persistent and bold. None of that was going to stop me. When I got bored at a job, I had no trouble finding the next one. Fortunately, while the sexist and sexual remarks worsened, my confidence as a technical person did not. I just assumed that is what it was like for a young woman in tech and if I wanted to continue to succeed, I’d need to learn how to deal with it. So I did.

Over the years I was getting more and more technical and asking for more challenging work. I got very good at deflecting sexist  remarks since I felt they were merely a distraction. I’d gravitate to the men who appreciated and respected my work, solidifying my relationship with them as a way to buffer and block perpetrators. We’d make jokes about them and laugh at the disgusting things they’d say or write to me. As it turns out, these were my allies and that was my defense mechanism.

In 2007, I made a lateral move to a company I felt was culturally aligned with my values. It was in the heart of downtown, the CEO was a woman and the role was at the intersection of all the things I loved doing. I was also feeling quite bold since the job description required 15 years of experience and I secured the position with less than half of that. My colleagues were respectful, and there were more women on my team and in my department. I felt I had arrived. This was it — I could dig in and spend some time here, nestling into a good, steady and comfortable place for my career.

This was utopia — for the first six months. Then we hired a new manager for the team, who immediately began hiring for an open position. The interviewees were people he knew, and one of them — the one we hired — was his golfing buddy. While I was a little annoyed that our process resulted in us hiring a friend, I didn’t let it bother me too much. After all, I was no longer worrying about what I was wearing to work or preparing for the next lewd comment, so having the boss’ friend on the team couldn’t be that bad. I would soon learn that sexism comes in many forms and it’s not always explicit or even intended by those being sexist. This is one of the reasons this issue needs more attention and why I’m sharing my story.

That all changed when we rearranged desks and I was seated in a cube next to my boss. While sitting at my desk one afternoon —  I overheard my boss’ hushed conversation on the phone. Try as I might to ignore it, I couldn’t. That afternoon, I heard a figure that changed the course of my life. A figure that I wished, at the time, I could un-hear. A figured that seemed so crazy high, it couldn’t possible be someone’s salary. It definitely could not belong to someone on my team. Alas, the figure was real, and it was my new colleagues salary — 30% higher than my own for the same, exact job.

In that moment, I felt intensely inadequate, exhausted, alone and ashamed. Inadequate because, after all I had done and how hard I had worked, my success was only in my own head. Exhausted because the years of minor annoyances (I didn’t see it as harassment) were only the beginning. It marked the journey that I thought ended, though just now discovered was only beginning. A journey in which how I looked mattered more than what I did and that it was acceptable to be propositioned by colleagues. It was a world in which being the “golf buddy” mattered more than hard work. I felt alone because I had nowhere to go, nobody to talk to and certainly not anyone who would understand how I felt. I felt ashamed because I had a piece of information about my colleague I wasn’t supposed to know. A secret I could never tell, but that would haunt me for years. Five years, to be exact.

Fast forward to 2011: I had spent the last five years over-functioning, earning my MBA while working full-time. I signed up for every extracurricular opportunity that had traces of “leadership” involved and I said “yes” to every special project. I was hell-bent on proving to myself and everyone else that I was worth that 30%. I was tired. I no longer socialized and was owned by my desire to arrive at the place I thought I had already arrived. This cycle of unhealthy over-achieving finally stopped when — now working for a new team at the same company— I asked my new boss if I could attend the 2011 Grace Hopper Women in Computing conference. In spite of the new project I had been assigned to and the vacation I had just taken, he believed in my ability to balance my work, and said “yes.”

The Grace Hopper Women in Computing conference was an experience that taught me the power of community and what happens when a group of women come together, supporting each other in the name of a profound pioneer. It was an experience I didn’t want to let go of because I realized that the last five years of my life was a lonely, endless search for support, understanding and guidance. This reflection became the basis for what is now Portland Women in Technology. This reflection led to my attempt to ensure that other women would not have to go through the same thing I went through, alone.

A decade after my life-changing pay inequity experience, I had the pleasure of meeting Jennifer Cloer, the Executive Producer of the Chasing Grace Project.  This project is a documentary series about women in tech, each episode covering an important theme in the industry: the pay gap, entrepreneurship, online harassment, male allies and why women choose to leave. This project will acknowledge the sometimes harrowing reality of the industry and show how we pave the path forward. During our coffee meeting — which was planned to discuss how PDXWIT could support her work — she asked if I had a “gender pay gap” story. I told the story for the first time. She then asked if I’d be willing to repeat my story on camera. Although I was terrified, I said yes. I worried my story wasn’t compelling, didn’t have enough adversity, or wasn’t interesting enough. Worst of all, what if nobody cared about my story? Despite my concerns, I proceeded with the project. Throughout the preparation and filming, Jennifer reminded me that my story was valid and needed to be told.

Through this process I’ve learned that the gender pay gap matters to everyone, independent of industry, job, or city. Money is the equivalent of power and when women are paid less than men, we remain subordinate in power. Without this power we lack the ability to be independent, to care for ourselves and families, educate ourselves, buy the goods and services that we want and support the causes and issues that matter to us. In the absence of power, we lack confidence, which perpetuates the cycle of women not having a voice, a seat at the table or the ability to control our futures. Technology is the future and if women who are working to build the future are not treated equitably, then we cannot expect that the future for women will be equitable.