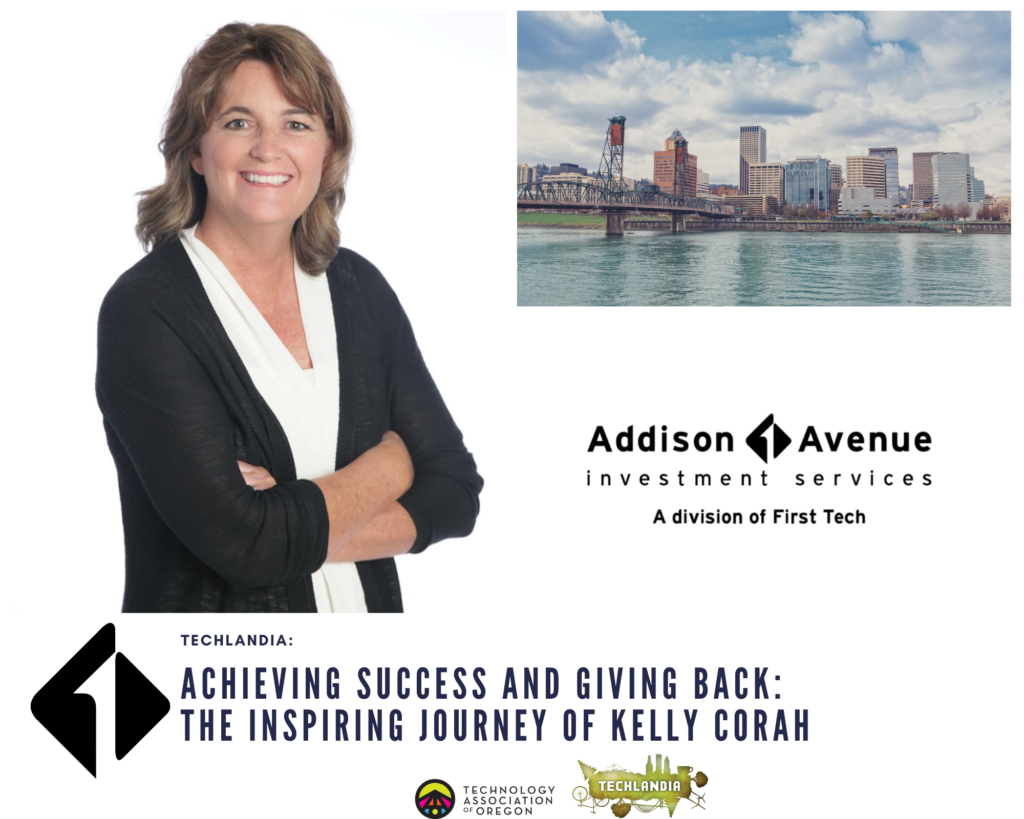 First Tech Federal Credit Union has been a long-time member and supporter of the Technology Association of Oregon, and Kelly Corah, SVP of the Addison Avenue division, has been with the credit union for over 25 years. She is currently transitioning into the role of President, Addison Avenue in January. In this interview, Corah discusses how she supports DEI initiatives, her philanthropic efforts and advice for her younger self, her long-term involvement with First Tech,
and the organization’s commitment to innovation and member satisfaction.

“A key aspect of my career has been my commitment to always being a constant learner and looking for opportunities to push myself forward. This has included seeking out leadership roles and taking on challenges that have helped me grow both personally and professionally.” -Kelly Corah

DEI Initiatives
A key aspect of her support for DEI initiatives has been a commitment to leaning in, learning more, and being uncomfortable. Corah believes it is important for leaders to be willing to challenge their own biases and engage in self-reflection to make meaningful changes. She is committed to supporting and promoting diversity, equity, and inclusion (DEI) initiatives within the organization. There is still much work to be done in terms of diversity and inclusion in the investment services industry. To address this, Addison Avenue Investment Services has partnered with a firm committed to diversifying its talent and actively looking for talented candidates in areas and industries that may have previously been overlooked. In addition to these internal efforts, she has also committed to supporting DEI initiatives externally. For example, she recently joined an international leadership networking group for women with the goal of promoting women’s diversity advancement and leadership within the industry. To support this goal, they have implemented initiatives such as hosting podcasts and events highlighting underrepresented groups; voices and experiences.

Philanthropy
As someone who has always been deeply committed to philanthropy, Corah has volunteered at multiple organizations. In 2019 Corah was a Purse-onality and mentor at Girls, Inc. “I went to an all-girls high school and felt that same type of empowerment in the halls every day. The halls of St Mary’s Academy are where I developed an ‘I got this’ attitude. It has served me well in my career.” Girls, Inc is such an important organization that empowers girls to be anything they
want to be.

Through this experience, Corah learned a lot about the challenges that girls and young women face as they grow up in today’s world and how important it is to empower them to be confident and capable.

One thing that has kept her at First Tech Federal Credit Union for 25 years is how the credit union has continued to evolve over the years, being given the opportunity to be a part of major accomplishments and make a positive impact in the community. For example, she has been involved with the Ronald McDonald House Charities of Oregon and SW Washington and is currently on the Board and leading committee work. Ronald McDonald House provides a warm and safe place for sick kids and their families when they need it most. She also shared that First Tech supports the hospitality carts in hospitals stocked with games and snacks for children and their families at the hospital. In addition to the above, she has been involved with Junior Achievement, providing education about money management to young students in elementary schools around the area.

Despite facing challenges, such as the struggle of being a woman in a male-dominated investment industry and the challenges of breaking down barriers, she has always used previous skills and experiences to work towards building a strong and cohesive team. Corah explains that she is grateful to have had the opportunity to be a part of such a great organization and to have been able to contribute to its success over the years.

As a mom of two grown daughters, she had all sorts of advice for them as they grew up and became the amazing young adults they are today. Her messages were consistent and have helped her on her journey:

Core Beliefs:
1) Surround yourself with people who make you feel good about yourself. (That was so
important as they navigated the high schools in a developing social media world)
2) Make your bed every day.
3) Write a thank you note before you use the gift someone gave you.
4) Believe that you can do anything that you put your mind and your heart to.
5) Take risks, challenge yourself, and take the time to learn something new every day.
6) It’s ok to have a bad day.
7) It’s ok to feel your feelings. Everyone has them.
8) Be a great listener.
9) Be curious.
10) Be you.

Portland is Changing
One of First Tech’s greatest accomplishments in recent years was the successful merger of two equal-sized credit unions in 2011, which resulted in the conversion of three investment programs into one. Today, Addison Avenue is one of the top credit union investment programs in the country in terms of assets under their management. They have a long-tenured, highly successful team of financial advisors, assistants, and program professionals focused on taking care of the financial planning and investment needs of First Tech members.

Throughout her time at First Tech, it has felt as though she has worked for no less than four financial institutions – with lots of change, new products, new leaders, and incredible results along the way. What has held true and remains today is that decisions are made based upon the needs of the member – every single time.

“I’m proud to be a part of this organization,” says Corah.

As a true Portland native, Corah has had the opportunity to witness firsthand the evolution of the tech industry ecosystem in the city. In recent years, there has been a significant expansion of the tech industry in Portland, with many new companies and startups popping up in a relatively short time, bringing both opportunities and challenges for the tech community there. Tech organizations are constantly emerging with rapid expansion, creating some challenges,
such as an ebb and flow of employment opportunities. Corah has had the opportunity to serve organizations through her robust experience in work to constantly adapt to changes in the market.