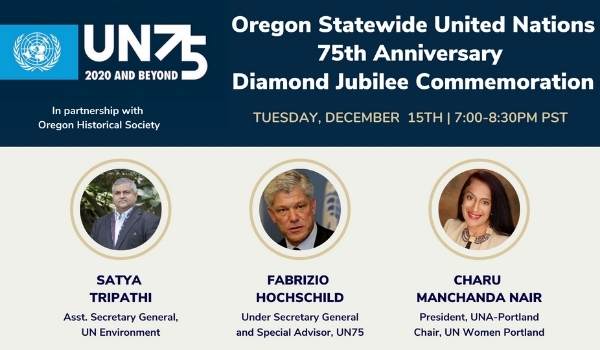 This event and fireside-style chat will provide historical perspective to deepen the conversations taking place in this current moment. Bring your thoughts, questions, friends, and family to a truly memorable event. Together, let us discuss a way forward in our connected world.

Satya S. Tripathi is UN Assistant Secretary-General, head of the New York office at UNEP, and secretary of the UN Environment Management Group. A development economist and lawyer with nearly 40 years of varied experience, Tripathi has served with the UN since 1998 in key positions in Europe, Asia, and Africa, in the areas of climate change, human rights, democratic governance, and legal affairs. He was head of human rights investigations for the UN in post-war Bosnia and Herzegovina (UNMIBH); chair of the Committees on Laws, Treaties, and Administrative matters for the UN-mediated Cyprus unification talks in 2004; UN Recovery Coordinator for Aceh and Nias where he facilitated international cooperation and funding of over $7 billion for post-tsunami and post-conflict recovery efforts in support of the Indonesian government and affected populations; and executive head of UNORCID, a UN system office of ten UN agencies established by the UN Secretary General in 2011 to facilitate the implementation of a $1 billion REDD+ partnership between Indonesia, Norway, and other stakeholders on climate change mitigation and adaptation through the conservation of forests and preservation of peat-land and bio-diversity. Tripathi was instrumental in establishing the Tropical Landscapes Finance Facility (TLFF) in Indonesia in 2016 and the Sustainable India Finance Facility (SIFF) in 2017 to leverage “private finance for public good” at mega-scale to achieve transformative social and environmental impact for millions of people in developing countries.

Fabrizio Hochschild is Special Adviser on the Preparations for the Commemoration of the United Nations’ 75th Anniversary and United Nations Secretariat, New York. In his current role as Under Secretary General and Special Adviser to the Secretary General, Hochschild coordinated the preparation for the commemoration of the 75th anniversary of the United Nations in 2020 and related celebrations through a system-wide process of consultations and reflections on the role of the United Nations in advancing international cooperation and in supporting member states’ ability to respond to emerging challenges and frontier issues. Prior to his appointment, Hochschild served as Assistant Secretary General for Strategic Coordination in the executive office of the Secretary General (2017–2019). Previously, he served as Deputy Special Representative for the UN peacekeeping mission in Central African Republic (MINUSCA) in 2016, UN Resident Coordinator, Humanitarian Coordinator, and Resident Representative of the UN Development Programme (UNDP) in Colombia from 2013 to 2016, and as director of the Field Personnel Division for the United Nations from 2010 to 2012. He started his career in 1988 with UNHCR and served in various field settings. A graduate of the University of Oxford, United Kingdom, he has published studies and articles on leadership, the protection of civilians, transitional justice, and reconciliation, among other topics.

Charu Manchanda Nair is president of the United Nations Association Portland and was first associated with the group as a speaker for International Women’s Day in the 1990s. Nair brings three decades of insight and experience in the arenas of industry, education, and community across private and public sectors to her work. Whether providing leadership, strategy, or diversity initiatives to Fortune 500 companies, launching the World Trade Center Portland with the executive team, working with almost 400 small to large businesses and leading a five-country trade mission, teaching original curricula as a Marylhurst University faculty member for a decade, or launching the first laptop in India, foresight is her key. She has made significant and core contributions to several boards over the years, bringing her critically innovative thinking and acclaimed work ethic to the service of each. These have included being a commissioner of human rights in Multnomah County, commissioner of civil rights for the Oregon Bureau of Labor and Industries, member of the board of directors for the Urban League, and a current member of the Oregon Historical Society’s board of trustees. Last October, her company curated a highly successful five-city equity summit spanning schools, cities, and communities that drew several hundred people to the inaugural launch. With three degrees spanning three countries and travels to seventy more, Nair’s work is uniquely informed by her significant hands-on local expertise, bridged with her wide-ranging worldwide acumen.