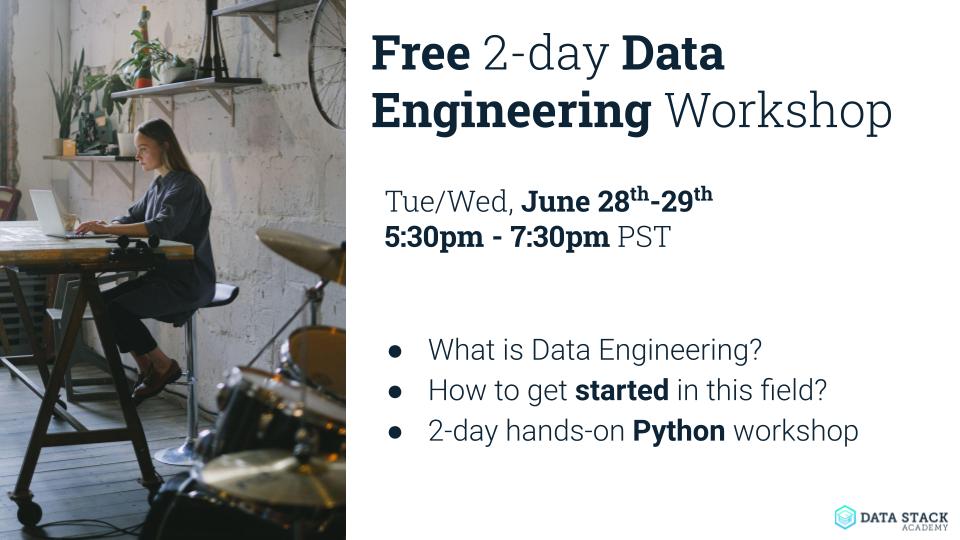 Join us Tuesday & Wednesday, June 28th-29th from 5:30-7:30pm for a FREE Data Engineering Workshop. The Fastest–Growing Job in Technology.

Big Data and the Cloud is changing the game, leading the way for a new generation of Data Engineers. Dice Insights reported in 2019 that data engineering is a top trending job in the technology industry, beating out computer scientists, web designers, and database architects [1]. LinkedIn listed it as one of its jobs on the rise in 2021 [2] and has seen a 50% year-over-year growth in the number of open positions.

There’s one problem: there are not enough Data Engineers.. If you have been looking for a career in tech, now’s the time!

In our webinar, Data Stack Academy and Epicodus will discuss how to become a Data Engineer—tools to learn, finding an internship, how to attract employers, and more. Questions are welcome—either by chat box, email prior, or live during the webinar.

Parham has been a Data Engineer and Cloud/Big Data Solution Architect for nearly 20 years working for major silicon valley tech companies. He started by loading floppy disks into an IBM 8086 machine to play games at the age of five. He learned programming as a teenager by hiding bookmarks on the shelves at Barnes & Noble. He now guides companies as a senior advisor on their digital transformation to the Cloud.

Parham is an Apache Software Foundation contributor and was an early adopter and contributor to open source Big Data projects such as Map Reduce and Hive. He was one of the founding members of Talend and helped their growth in the Americas and Asia Pacific market during the early years of the company. As a Talend ambassador, he’s trained thousands of users around the world. Later, he served as a Big Data Product Manager at Pivotal (currently known as Vmware Tanzu). He was a team member for Greenplum Distribution of Hadoop and led the team behind a Hadoop distributed SQL query language called HAWQ.

As a Data Advisor and Consultant, Parham has had the opportunity and pleasure to work with nearly every Fortune 100 company over the years. From managing thousands of node clusters to optimizing data tasks that you are familiar with behind the scenes.

Alma Frankenstein is delighted to be a teacher and junior data engineer at Tura. She first learned to program in a series of dingy basements, where smart, weird dudes taught her Clojure, Python, and the Linux command line. She later went on to polish her web dev skills at Epicodus bootcamp, and to work at the molecular genomics lab at OHSU, using cutting-edge AI to identify variants in DNA and help diagnose rare genetic diseases. Alma holds a Master’s of Science in Systems Science from Portland State University, where she studies cybernetics, information theory, networks, chaos, and complexity in nonlinear systems. She is interested in the use of data and technology to promote social justice and climate activism, and believes that accessibility to careers in tech is essential in supporting those goals.