PDX In June: Center of the Smart Cities Universe 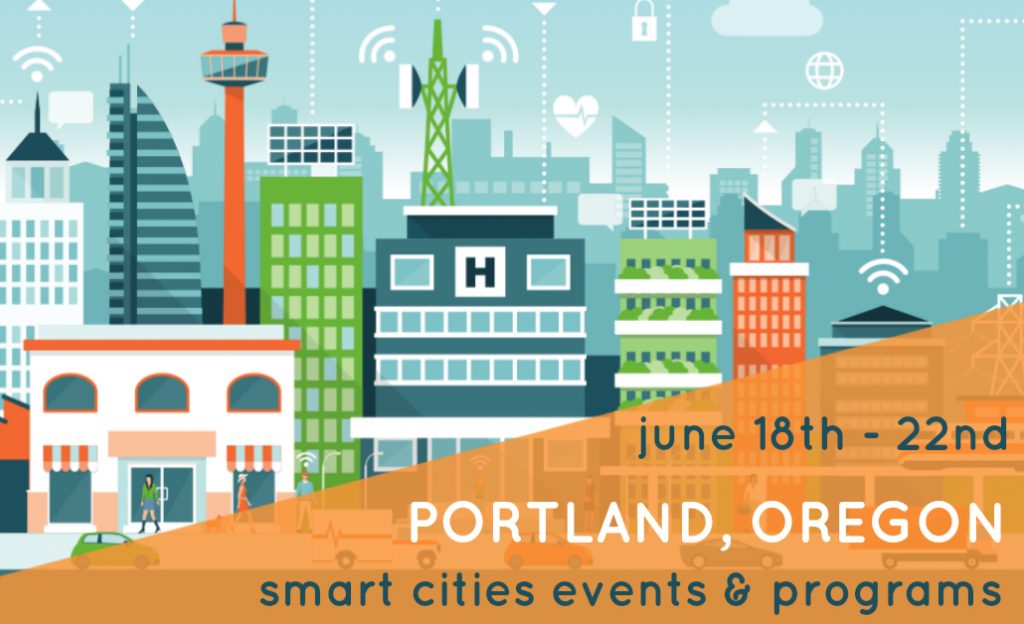 Technology Association of Oregon is proud to be a host, partner and supporter of a number of smart cities related events in Portland Monday, June 18th – Friday, June 22nd. We hope you will join us for some – or all – of the opportunities to connect with forward-looking municipalities, research institutions, federal agencies, and leading private sector companies discussing the latest smart city technologies to provide better, more equitable services.

Smart City PDX Traffic Safety Sensor Pilot will be hosting a Ribbon Cutting on Monday, June 18th at 11:30 am at Clinton Park. The Traffic Safety Sensor project is a pilot partnership between the City of Portland, AT&T, Current by GE, Intel and Portland General Electric. It is one of the first projects to be implemented as part of Portland’s overall Smart City PDX Initiative.

The sensors, installed on street lights on three of Portland’s most dangerous corridors: 122nd between Burnside and Duke; SE Hawthorne between 11th and 46th; and SE Division between 11th and 122nd.will help traffic safety engineers design safer streets by compiling information about how people use streets, including where they typically walk, bike and drive, and how fast people are driving.

The Roadmap Conference is the leading electric and smart mobility conference in the United States. Hosted June 19th & 20th at the Oregon Convention Center, Roadmap includes nearly 100 national and international speakers, dozens of exhibits, regional smart mobility tours, and high-energy interactive breakout sessions. With over 600 participants in 2017, Roadmap continues to be the premier forum to explore emerging industry trends and best practices with a diverse mix of industry, utility, and government leaders.

The conference was originally launched by Portland General Electric and Portland State University in 2011, and is now produced by Forth.

Join regional peers to share and discuss how cities and counties are transforming into “Smart Communities” at a roundtable and workshop hosted at Multnomah County in conjunction with Gartner from 8:30 am – Noon on Tuesday, June 19th.

Session One will include a presentation and Q&A on Extending your Smart Communities Roadmap Regionally. How governments looking to develop “Smart” initiatives that cross jurisdictions need to work together to develop a Smart Community Roadmap that addresses collaboration, partners and interoperability to improve the quality of life for those living in the region.

Session Two will provide real lessons learned from other cities/counties and how to approach building a practical, action-oriented Smart Community Strategy and Roadmap, and demystify what it really means to be “smart”

Located in the  Oregon Convention Center at the heart of Portland on the Green Loop and served by the Portland Street Car, Global Tech Jam will showcase major smart city developments and test beds in the region and around the world.

Hack Oregon is a Portland based nonprofit and Smart Cities program focused on building data-driven software to address important themes in the public interest. Each project is produced by interdisciplinary teams of volunteers working in partnership with government, academic, and industry partners.  Projects often approach challenges where data is not easily accessible for analysis or visualization, both for stakeholders and the general public.

Join them for a night of drama, celebration and data-driven intrigue on Thursday, June 21st – 6 pm – at Revolution Hall where they will unveil five new story collections on the CIVIC platform, an open data portal built by Hack Oregon. CIVIC integrates data across regional sources, promotes opportunities for new analysis and provides a browseable, clear, visual interface.

General Admission tickets are FREE, but space is limited. Consider purchasing a VIP ticket  – the sales of which directly support Hack Oregon volunteers.