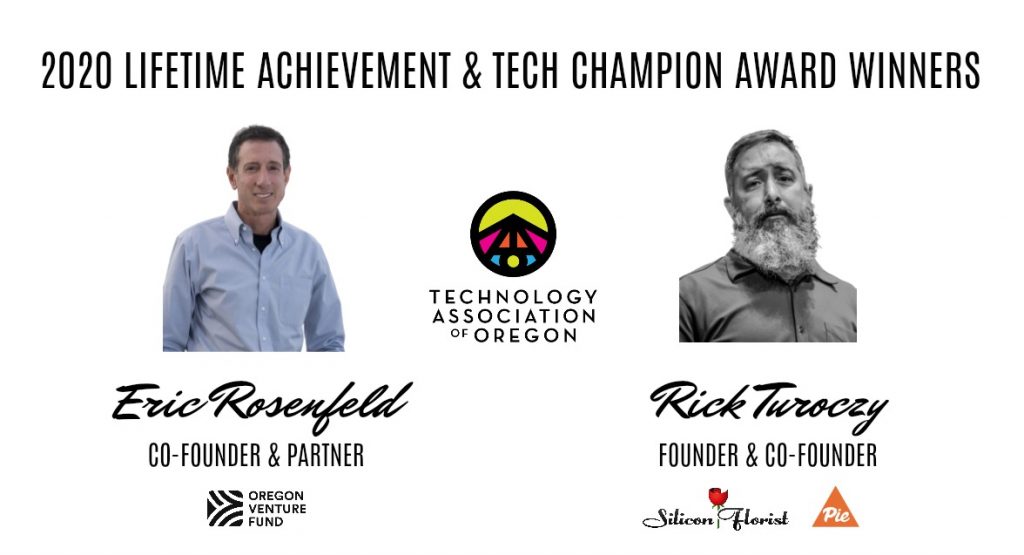 Portland, Ore. – February 26, 2020 –The Technology Association of Oregon (TAO) announced today the selection of Eric Rosenfeld of Oregon Venture Fund as the Lifetime Achievement and Rick Turoczy of Silicon Florist and Portland Incubator Experiment as the Tech Champion award winners. Rosenfeld and Turoczy will be recognized as part of the Oregon Technology Awards ceremony, an annual program celebrating excellence and achievement in the region’s technology industry, on April 29.

“The Lifetime Achievement Award recognizes excellence in industry leadership as well as an individual’s positive impact in the greater Oregon community,” said Skip Newberry, President and CEO at TAO. “Eric has worked tirelessly to help drive and shape Oregon’s economic future through his support of startups based in Oregon and SW Washington. The impact of Eric’s commitment to our local economy is widespread and is felt directly by the thousands of people employed by companies funded by the Oregon Venture Fund. I’m thrilled to recognize Eric as the 2020 Lifetime Achievement winner.”

With the backing of the region’s business and technology leaders, universities, and foundations, Oregon Venture Fund and its investors have invested $98 million in 64 startups across Oregon that have grown to collectively employ over 4,200 people. 44% of the startups were founded, or are led, by women and entrepreneurs of color. In addition to his work with the Oregon Venture Fund, Rosenfeld is a past chair of The Catlin Gabel School, the Oregon Jewish Community Foundation, the Oregon Entrepreneurs Network, and Angel Oregon.

“I’m thrilled to be honored with the Lifetime Achievement Award,” said Rosenfeld. “I strongly believe in the transformative power of community, capitalism and entrepreneurship. It’s been a privilege to work with an extraordinary group of business and technology leaders to amplify the work happening here in Oregon and I’m proud of the Fund’s role in helping to drive and shape our regional economic future.”

2020 Tech Champion Rick Turoczy has been working in, on, and around the Portland startup community for more than 25 years. As founder and editor of Silicon Florist, Turoczy has blogged about Portland startups for more than a dozen years. Work on his blog led Turoczy to co-found the Portland Incubator Experiment (PIE), an ongoing experiment exploring the potential for mutually beneficial collaborations between the Portland startup community and more well-established entities, including partners like Autodesk, Coca-Cola, Daimler, Google, Intel, Nike, Prosper Portland, Puppet, and the State of Oregon, among others.

“Rick has been an incredible advocate for the Portland tech community,” says TAO’s Newberry. “The Tech Champion award recognizes a leader who doesn’t work for a tech company, but has made a powerful impact on the technology industry. Rick’s ability to draw special attention to smaller startups and developers while simultaneously thinking “big-picture” and working to improve collaboration between established organizations and newer local companies has had a tremendous effect on our community and I can’t think of a better recipient of our 2020 award”

In addition to his work with Silicon Florist and PIE, Turoczy co-founded TechfestNW, a tech event run in collaboration with Willamette Week, which has been dubbed “the next SXSW” by Fortune magazine. Recognizing the need for more grassroots infrastructure to celebrate the community, he started Portland Startup Week to enable more people to promote the companies that are being built in Portland. Using what he learned from years of ecosystem building efforts and experimentation at PIE, Rick also co-founded Built Oregon, a nonprofit designed to celebrate, connect, and accelerate all of the amazing consumer product companies throughout Oregon.

“I am humbled to accept the Tech Champion Award,” said Turoczy. “It’s an honor to work within our expanding entrepreneurial ecosystem and to focus a spotlight on the connections and collaborations that are accelerating the growth of some truly amazing companies being built in our community.”

The 2020 Oregon Technology Awards Program is presented by JLL and Cambia. TAO anticipates that the event will draw more than 700 attendees, including entrepreneurs and tech professionals from across the region and around the globe. Tickets to the April 29  event can be purchased here.