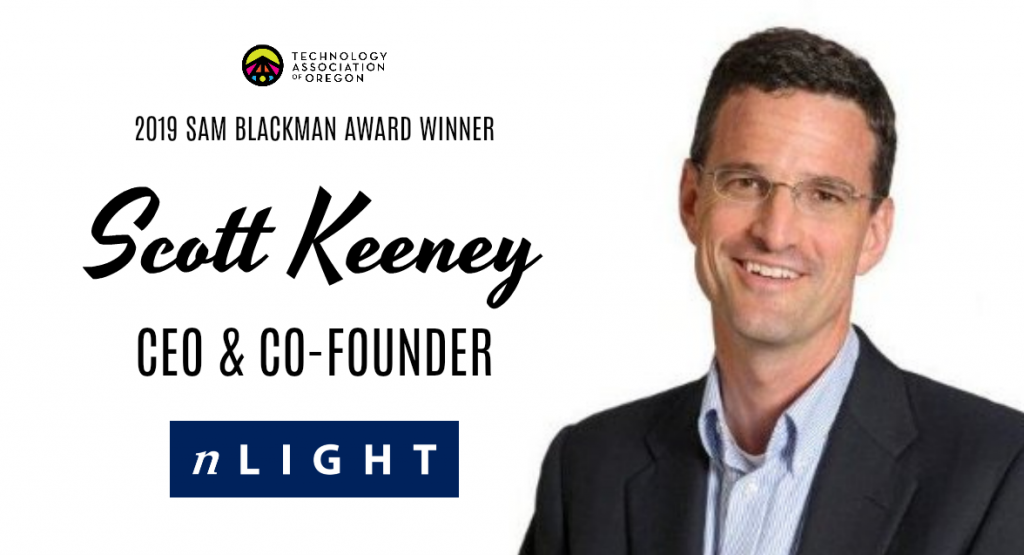 Portland, Ore. – February 20, 2019 – The Technology Association of Oregon (TAO) announced today that Scott Keeney, CEO of nLIGHT, has been selected as winner of the 2019 Sam Blackman Award. Formerly known as the Technology Executive of the Year award, the Sam Blackman Award honors executives of Oregon and Southwest Washington-based technology companies for excellence in industry leadership as well as an individual’s positive impact in the greater community.

Headquartered in Vancouver, Washington, nLIGHT is a leading provider of high-power semiconductor and fiber lasers for industrial, microfabrication, aerospace and defense applications. Since its founding in 2000, the company has grown to over 1,000 employees with operations in the U.S., Asia and Europe. In 2018, nLIGHT completed a successful IPO, the first technology company to do so in the Portland metro area since 2004.

“I’m honored to be recognized by the Technology Association of Oregon and proud of what our team at nLIGHT has achieved over the past two decades,” said Keeney. “I remember Sam for his commitment to both the technology sector and the community.  His work remains an enduring example that should continue to inspire all of us.”

Skip Newberry, President and CEO of TAO, said Keeney deserved to be recognized for his strong leadership and dedication to the future of the region’s technology industry.

“Scott Keeney’s leadership of nLIGHT and ongoing contributions to our technology community made him an obvious fit for the 2019 Sam Blackman Award,” said Newberry. “In addition to leading nLIGHT through its IPO, Scott is committed to developing the next generation of technology workers by volunteering time and resources to local public schools. He absolutely embodies what Sam believed in and it’s a privilege to name him this year’s award recipient.”

The 2019 Oregon Technology Awards is presented by JLL and Regence. TAO anticipates more than 600 attendees at the April 17 event, including entrepreneurs and tech professionals from across the region and around the world. Tickets can be purchased here.